Her appointment, as a young Afghan woman brought up and educated abroad, visibly raised the bar for Afghan women in pursuit of professional advancement in a country that remains deeply conservative.

But things could have turned out very differently for Khadijeh, whose working class refugee family never dreamt that their daughter could pursue an academic career that would lead her back to her Afghan roots, with a little help from the Government of Japan and IOM, the UN Migration Agency. 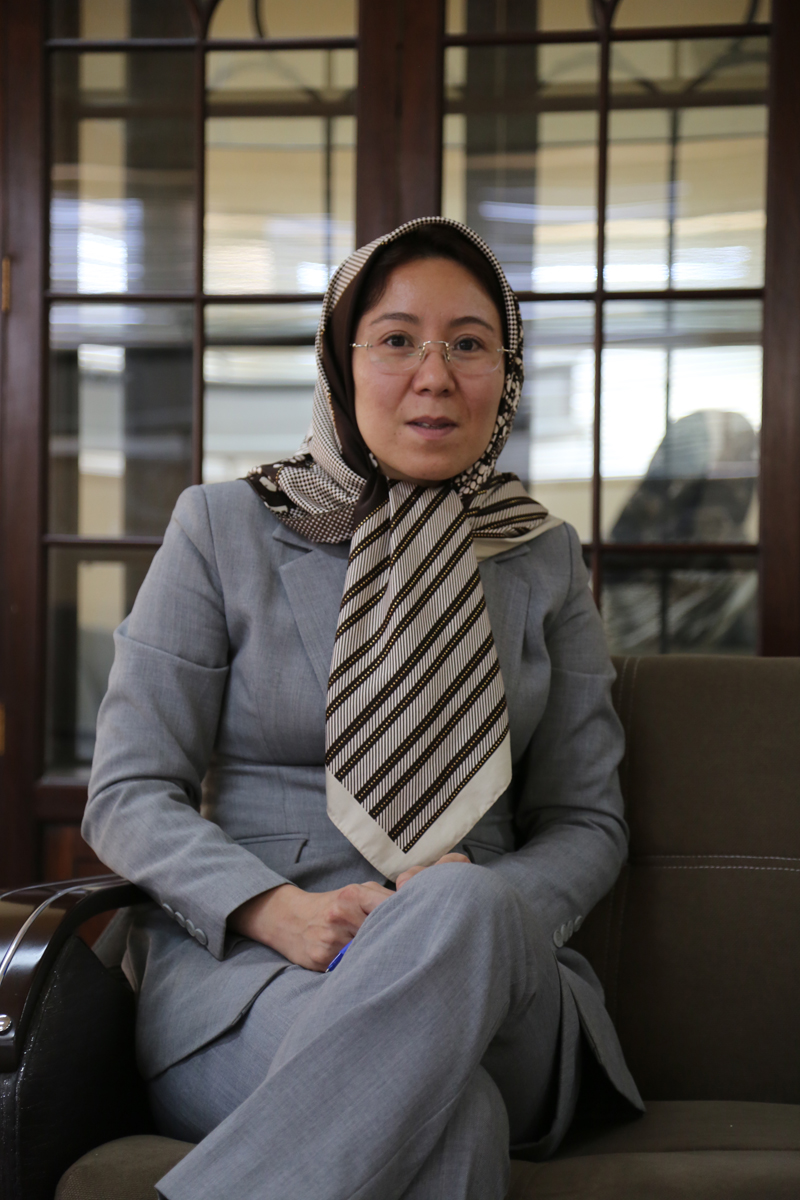 Born in the Iranian city of Isfahan in 1982, Khadijeh was always bright and ambitious. “I remember when I was a small child, I would always watch important people on TV and think to myself “Why isn’t it possible for simple people like us to be on TV? I want to be on TV as well!’”she recalls.

High scores in Iran’s annual nationwide university entrance exam (konkur) in her final year of high school earned her a coveted place on the civil and environmental engineering programme of Tehran University – the top-rated school in the country.

Her teachers were convinced that Khadijeh had a brilliant future. But with few Afghan refugees entering higher education, let alone Tehran University, she already found herself running up against cultural barriers.

“As an Afghan woman, going to study in Tehran, a city several hours by road from Isfahan, without anyone accompanying me, was unacceptable in my culture. Both my father and mother were very much against the idea,” Khadijeh explains.

But her teachers persisted and convinced her mother that her daughter was exceptionally bright and that she, her mother, should go and live with her in Tehran. Eventually her father also gave in.

“But he was so ashamed of me, a single girl, studying at university, that he didn’t dare to tell anyone else outside our close family about my new life. Every time people came to visit, he pretended that I was just out buying groceries or visiting another relative,” she laughs.

It wasn’t until a year later, when Khadijeh had already proved that she was once again among the brightest in her class, that her father finally broke the news to family and friends.

After receiving her Bachelor’s degree, she completed a Master’s. “After that I actually wanted to return to Afghanistan to become a teacher at one of the universities in Kabul. But my Iranian professors asked me to stay in Iran, continue with a PhD and teach in Iran instead,” she says.

When, as the first Afghan woman to receive a doctorate from an Iranian university, she eventually completed the PhD, it was Iranian President Rouhani himself who awarded her the certificate.

“I would have still come back to Afghanistan if I had not been part of IOM’s (Return of Qualified Afghans - RQA) programme. But RQA made it much easier for me. Many young Afghans living in Iran have never been anywhere else and are worried to come back to Afghanistan alone, because all their family and their network is in Iran. I felt like that,” she explains.

IOM’s RQA programme, funded by the Government of Japan, is designed to strengthen the capacity of the Afghan public and private sectors and has helped 617 qualified Afghans to return to Afghanistan from Iran since 2008.

The programme identifies jobs and subsidizes remuneration for participants who contribute their expertise in areas such as IT, engineering and healthcare.

Khadijeh became part of the team of engineers that was tasked with reconstructing the Darulaman Palace - a destroyed palace on the outskirts of Kabul.

Her knowledge of modern engineering software, acquired at Tehran University, proved invaluable and she was able to train her new Afghan colleagues in its use.

“After six months in the RQA programme, while working on the Darulaman project, I was introduced to people representing the Presidential Palace. They liked my work and encouraged me to apply for the position as Deputy Minister at the Ministry of Mines and Petroleum,” she explains.

In her new job, Khadijeh is focusing on the development of the Afghan mining sector as a source of revenue for both the people and the government of Afghanistan, and is dedicated to fighting corruption.

When asked about her family, who still live in Iran, she smiles. “Now they are very proud of me.”

Connecting the Dots: Why Ethical Standards in Humanitarian Data Are More Important than Ever