The Tajik-Afghan border stretches for over 1300 kilometres through remote, inaccessible, and extremely mountainous terrain. It cuts through the Pamir Mountains, the so-called “Roof of the World”, home to some of the world’s highest mountains at the junction of the Hindu Kush, Tian Shan and Himalayan ranges.

The harsh geography, often compounded by isolation in the winter months due to heavy snows, make livelihoods a distinct challenge for communities living there. A deteriorating security situation in northern Afghanistan since 2014 has added an extra burden for communities, through increasing the scope for armed drugs smugglers and criminal groups to carry out their activities. Outward migration from border communities is high, as people seek more sustainable opportunities elsewhere.

IOM, the UN Migration Agency, has begun the delivery of in-kind grants to small and medium sized enterprises (SMEs) along the Tajik-Afghan border with funding from the Government of the United Kingdom. The SME grants will contribute to stability in remote areas of the border which are currently affected by cross-border crime through encouraging licit trade and disincentivizing smuggling, creating jobs, and strengthening links between Tajik and Afghan communities.

Following a competitive application process, 10 businesses received grants including materials and equipment worth 10,000 USD in order to expand their existing enterprise. These grants are specifically designed to encourage trade and investment between Tajik and Afghan businesses, as well benefitting the communities in which the SMEs are located through providing goods and services and employment opportunities. Over 100 applications where received, worth potential grantees being judged on business acumen and how their expanded business would contribute to cross-border trade and help their local community. A further 10 SMEs will be supported next year. 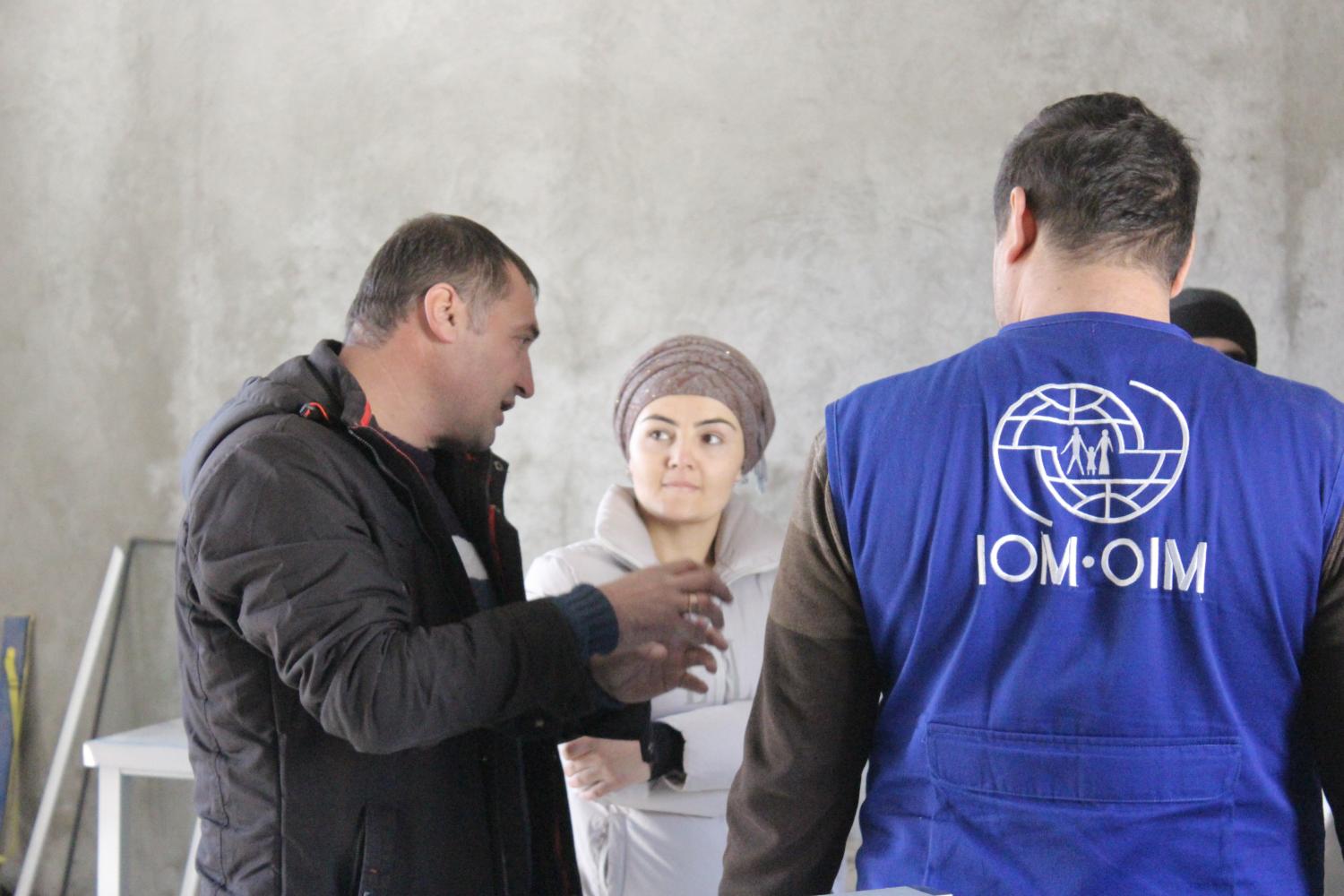 Khursheda Ilchibekova a business-owner who is expanding her business through an IOM grant discusses her plans with IOM staff. George Williams © IOM 2017

Khursheda Ilchibekova is one SME owner who is expanding her business through an IOM grant. She lives in Tajikistan’s Ishkashim district which sits on the edge of the Wakhan Corridor, the thin strip of Afghanistan that separates Tajikistan from Pakistan. With IOM’s assistance she is expanding her bakery business by renovating a redundant building in Ishkashim and stocking it with new ovens, mixers and other equipment.

Ilchibekova currently has three employees and will hire a further three people once the renovation is completed to help her with the baking of bread, confectionary and other food products. Ilchibekova currently sells much of her produce at the cross-border market in Ishakshim used by Tajiks and Afghans and to Afghan businessmen. She also sources a lot of her ingredients from Afghan traders. Looking to what the future holds for her cross-border business she said:

“My Afghan customers are the best, they cannot get the cakes and sweets I produce their side of the border. When my new bakery opens I hope more Afghan traders will visit. My plan is to open a small café when the bakery is established and using the profits from this my dream is to open a chaihana [teahouse] in the centre of the town.”

Further west along the border lies the small town of Khalikhumb in Darvoz district, which serves as a crossroads for those travelling between the Tajik capital Dushanbe, Gorno-Badakhshan Autonomous Region, Afghanistan and even onwards onto China.

Here Sherali Sudurov is expanding services to travellers, traders, and businesspeople by building a hotel and business centre above his restaurant situated by the bridge linking Afghanistan and Tajikistan. The restaurant was originally aimed at tourists travelling the famed Pamir Highway in the summer months, but is enjoying high demand in the low season from the border guards stationed on the bridge, traders using the cross-border market, and from orders placed by the Afghan community living across the Panj River. The restaurant is open for 10 hours a day, but staff are happy to prepare food out of hours when required which has led to the restaurant acting as a meeting point for travellers and businesspeople alike. Highlighting how his business acts as a hub for Tajik-Afghan trade, Sherali gave an example:

“Afghan businessmen leave trucks parked here overnight. Earlier this year a driver was needed to transport goods in Tajikistan so I introduced him to someone in the village who now works for them full time as a driver earning $250. And now they have another vacancy for a driver”

The SME grants represent a scale-up of previous business development initiatives along the Tajik-Afghan border which targeted vulnerable community members, for whom 210 grants were delivered.

“Business and trade provide the best platform for tangible cooperation between Tajik and Afghan border communities” said Dragan Aleksoski, IOM Chief of Mission in Tajikistan. “These grants will allow the private sector to play a key role in the stability and prosperity of the Tajik-Afghan border, helping businesspeople to maximize the economic potential of the area and create much needed jobs”.

Teddy Noel-Hill is an IOM programme manager in Dushanbe