Tedros Adhanom Ghebreyesus, WHO Director-General, praised the collaborative efforts that went into containing the outbreak, which was declared on 08 May 2018, citing “the tireless efforts of local teams, the support of partners, the generosity of donors and the effective leadership of the Ministry of Health.”

“That kind of leadership, allied with strong collaboration between partners, saves lives,” Ghebreyesus said on a visit to Kinshasa to mark the end of the epidemic.

IOM, the UN Migration Agency, was among the partners he mentioned. Having already worked alongside WHO and the DRC Government to contain a yellow fever epidemic in 2016, IOM leveraged its migration expertize to help curb the spread of the latest Ebola epidemic.

The ninth epidemic involved four separate locations, including an urban centre with river connections to the capital Kinshasa and to neighbouring countries, as well as remote rainforest villages, which sparked widespread fears that the outbreak would spread like wildfire.

Hiroshi Karube, Japanese Ambassador to the DRC, speaking during the epidemic and commenting his country’s decision to contribute USD 3,000,000 to the Ebola response via IOM, WHO and Unicef, said he hoped the aid would enable those agencies “to provide relief in an efficient manner to the families and communities directly affected by this epidemic.” He added that Japan remained committed to supporting the DRC should any fresh public health challenges occur.

Given the nature of this latest epidemic, population mobility, including cross-border movements — was identified as being of critical importance. In the early stages of the outbreak, IOM worked with the National Programme of Hygiene at Borders (PNHF) and WHO to deploy epidemiologists for surveillance and risk communication at points of entry and other strategic sites. 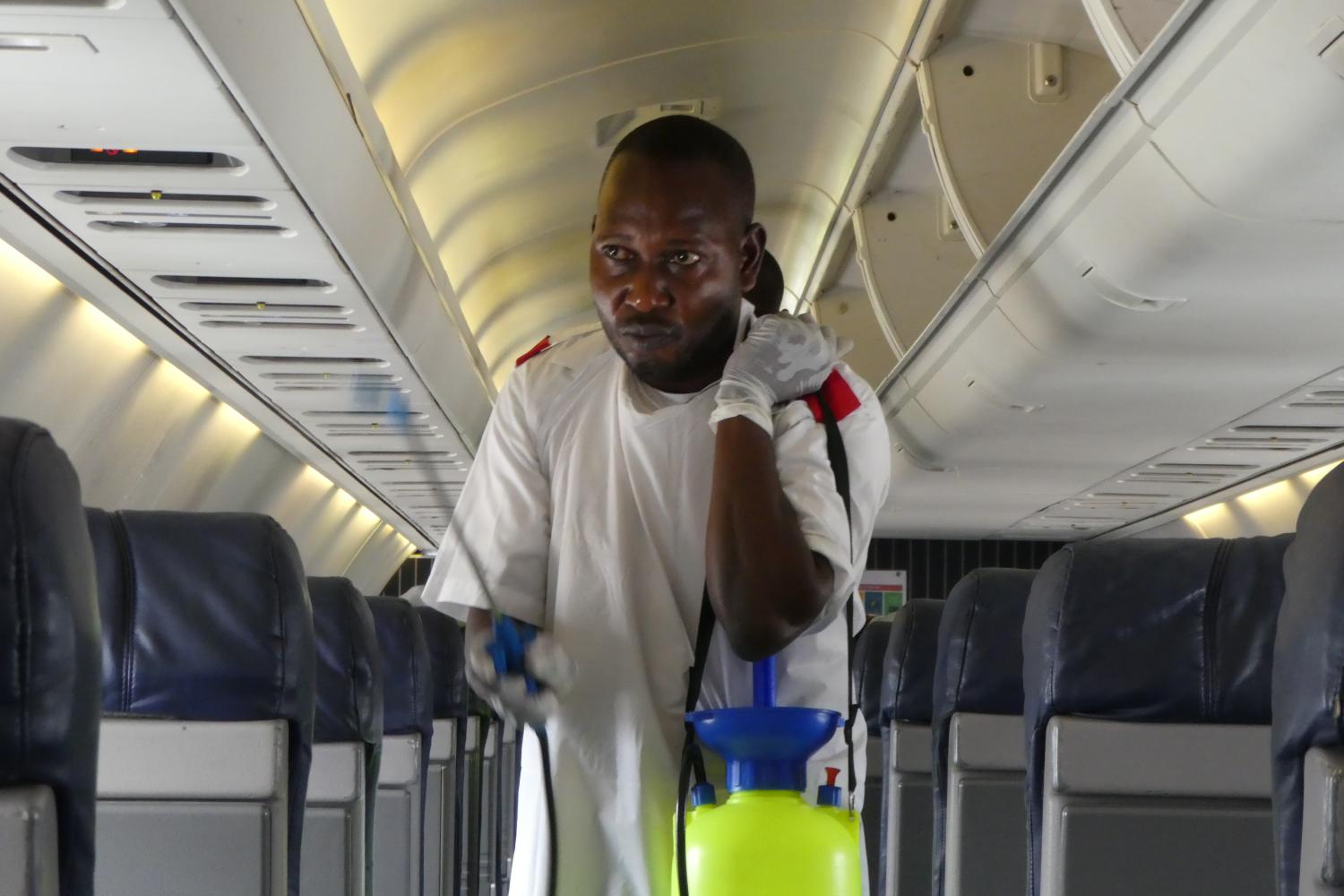 The Organization also undertook, with the backing of the DRC Health Ministry and WHO, participatory population mobility mapping in Bikoro and Mbandaka. Through this mapping, IOM identified the sites where people congregate or transit: most typically ports, markets, churches and bus terminals.

“The aim of this mapping exercise was to identify vulnerable areas, which should be prioritized during our interventions; having maximum impact. It also has the advantage of getting the local population involved in the response as the mapping is based on their indications of where people congregate or transit,” said Jean Philippe Chauzy, IOM Chief of Mission in the DRC.

The entry points range from a lakeshore plastic table shaded by a sun umbrella to bamboo huts alongside the dirt roads that snake through the lush greenery. Some roads are barred with a long stem of bamboo, others with a rope made of gnarled creeper.

The procedure is the same at all points of entry: those screened wash their hands with chlorine solution, have their temperature taken and their data is noted down by the community health workers who man the posts. Supervisors collect and compile the data. Any suspected cases, such as someone vomiting or running a fever of 38C or more, are isolated and the incident management team made up of DRC Ministry of Health and WHO experts is called to take the suspected case to the treatment centre.

A host of cultural and practical reasons mean that in practice screening and hygiene measures can be difficult to impose, particularly for local residents who have to cross the same road block more than once in the day.

“Getting people here to wash their hands except when they sit down to eat is quite a challenge,” said a young health worker at the barrier on the road leading out of Itipo towards Iboko, both forest villages that were affected by the outbreak.

IOM is continuing to work closely with the community, the Ministry of Health and WHO to put an international health regulation (IHR) strategy in place, and will help implement the strategy at the national and local levels; strengthening IHR core capacity at points of entry in DRC.

Read this story in French