Sarajevo – When over a million people moved en masse through Central Europe in 2015/16, the small, landlocked country of Bosnia and Herzegovina (BiH) was never part of what became known as “the Western Balkans route”.

Now, two years later, it is the newest destination for thousands of stranded migrants. They come from Syria, Iraq, Turkey, Algeria, Afghanistan and they are still struggling to continue their journeys to Western European. They are becoming ever more desperate, trapped within the borders of  Balkan countries, falling prey to criminal groups of human traffickers and smugglers.

Migration management in BiH was not such a complicated task for state authorities during 2017, as just  755 migrants passed through the country. Today, however, the situation is changing fast, with close to 3,000 migrants and refugees on the territory of a country from which, they hope, they will more easily access to the European Union.

In the last three weeks alone, 1,200 persons were reported to have transited Bosnia and Herzegovina. This may not sound much when compared to the huge numbers seen in recent years, but when compared to the numbers that passed through BiH during the entire year, it’s time for the world to wake up and smell the coffee.

Beyond migration management concerns, highlighted by the fact that the official migrant accommodation capacity of BiH is around 200 beds, the situation in the field now has now developed into a humanitarian crisis, albeit with low numbers, but a crisis nonetheless.

Migrants and refugees are sleeping out in the open or in abandoned buildings the capital Sarajevo, as well as in the northwest of the country in the area of Bihac and the town of Velika Kladusa, (the latter being the preferred crossing point into Croatia).

While waiting to make the risky and dangerous attempt to cross, the majority of migrants sleep in the parks of these cities and towns. With spring turning into summer, the rising temperatures, lack of toilets, and deteriorating hygienic conditions, the situation has raised major public health concerns.

However, the local population of affected locations have responded with an outpouring of solidarity, while local volunteer groups are working tirelessly to meet the most urgent humanitarian needs. Many credit their own refugee experiences and the hardships faced by them during the Yugoslav conflicts of 1991-1995 as motivating them to reach out to support those in need. The local population can provide empathy and comfort to the these exhausted people in need, but these citizens cannot continue to carry the burden of the humanitarian response alone.

While waiting for  state authorities to draft an urgent action plan that would enable Bosnia and Herzegovina to boost its accommodation capacities and border security, local municipal authorities, Red Cross branches, as well as  local and international NGOs, are now stepping in to provide basic assistance with food, hygiene and healthcare in an attempt to prevent the further deterioration of the situation into a larger humanitarian crisis.

In coordination with UNHCR, IOM has also enhanced its response to the ongoing situation, focusing on providing support to  local authorities and volunteer groups in the locations where migrants and refugees are currently concentrated and where the needs are most apparent. This support includes urgent basic assistance to the migrants in vulnerable situations that have arrived on the territory.

Assistance comes through mobile IOM migrant protection teams that now operate across the country. As a part of their overall response, the teams provide identified cases with first aid, medical, and psychosocial assistance. Teams are accompanied by an Arabic language interpreter, with interpreters for Farsi, Turkish, Pashto, and Urdu on call. Interpreters are critical in the current situation, particularly in the light of an overall shortage in the entire region, providing critical avenues for communication between the migrants, local service providers and authorities.

In the current situation, IOM also provides temporary accommodation in local hotels or hostels to families and other migrants in vulnerable situations and to refugees. In line with its strategy to support local institutions, IOM additionally purchased urgently  medication for medical health centers in Bihac and Velika Kladusa. In Bihac, the IOM response came at the  request of the local Mayor to work with the local Red Cross to provide accommodation and sanitary facilities. With numbers continuing to increase on a daily basis, the establishment of an official government accommodation facility remains a top priority, but it could take another month and a half before additional accommodation is secured. 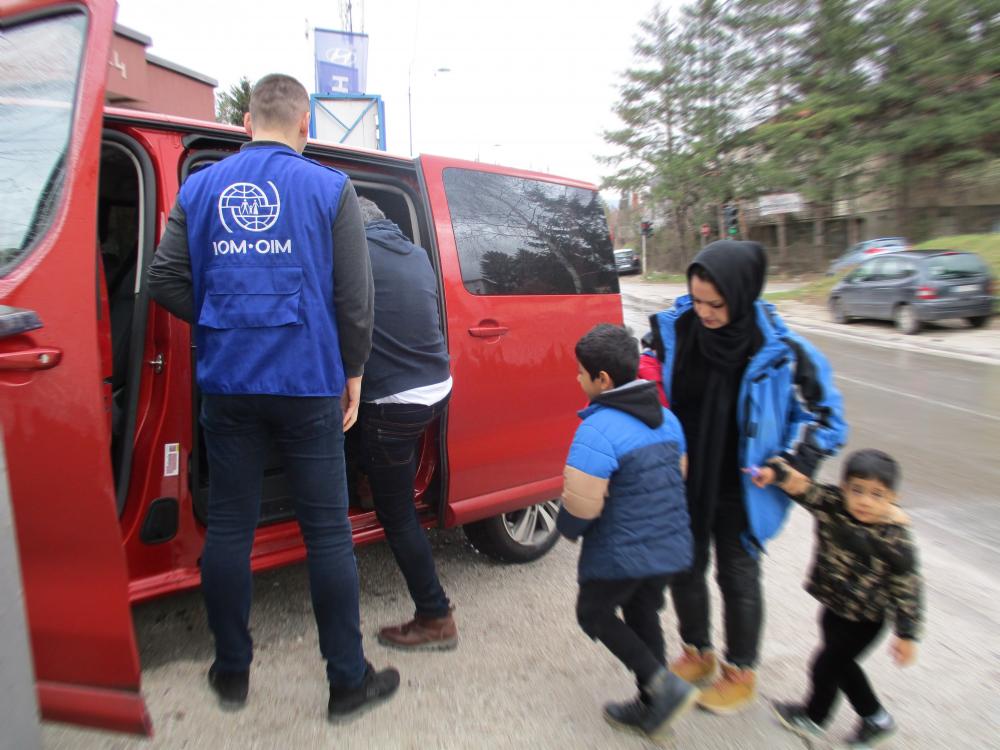