Placing IDPs on the Map in Ethiopia and Beyond

Addis Ababa – Climate change combined with conflict has resulted in a significant increase in the number of internally displaced people (IDPs) in Ethiopia in recent years.

“Ethiopia is one of the countries experiencing large numbers of internal displacement – 2.6 per cent of its population,” said Mitiku Kassa, Commissioner of the National Disaster Risk Management Commission of Ethiopia, during the 109th Session of International Organization for Migration (IOM) Council in late November.

To address this phenomenon, the Ethiopian government is taking an active role to develop strategies that assist not only its 2.8 million displaced citizens, but also drive long-term sustainable solutions for the 40 million people internally displaced from conflict in the world.

“We only managed to escape with our lives – we did not carry anything with us, only our children, but I know there are people here who have it worse than us,” said Samir*, a 22-year woman who was one of the nearly one million people displaced from communal violence in Gedeo-Guji zones in March 2018.

Samir fled with her husband, seven children and extended family members. Her family has found shelter in an unfinished building. Today, over 45 per cent of Ethiopia’s displaced populations stay in local communities, rented accommodation or with relatives, while 42 per cent live in camps.

The International Organization for Migration, IOM, provides lifesaving support and supports IDPs to begin their lives again with dignity. But creating circumstances where they can truly thrive, find new work opportunities, and access land, education and other services remains a challenge for humanitarians and governments alike.

IOM, along with governments and international organizations, promotes three durable solutions for displaced populations: integration in areas where they settle, relocation to a third location, or, ideally, return home after the crises they fled are resolved. 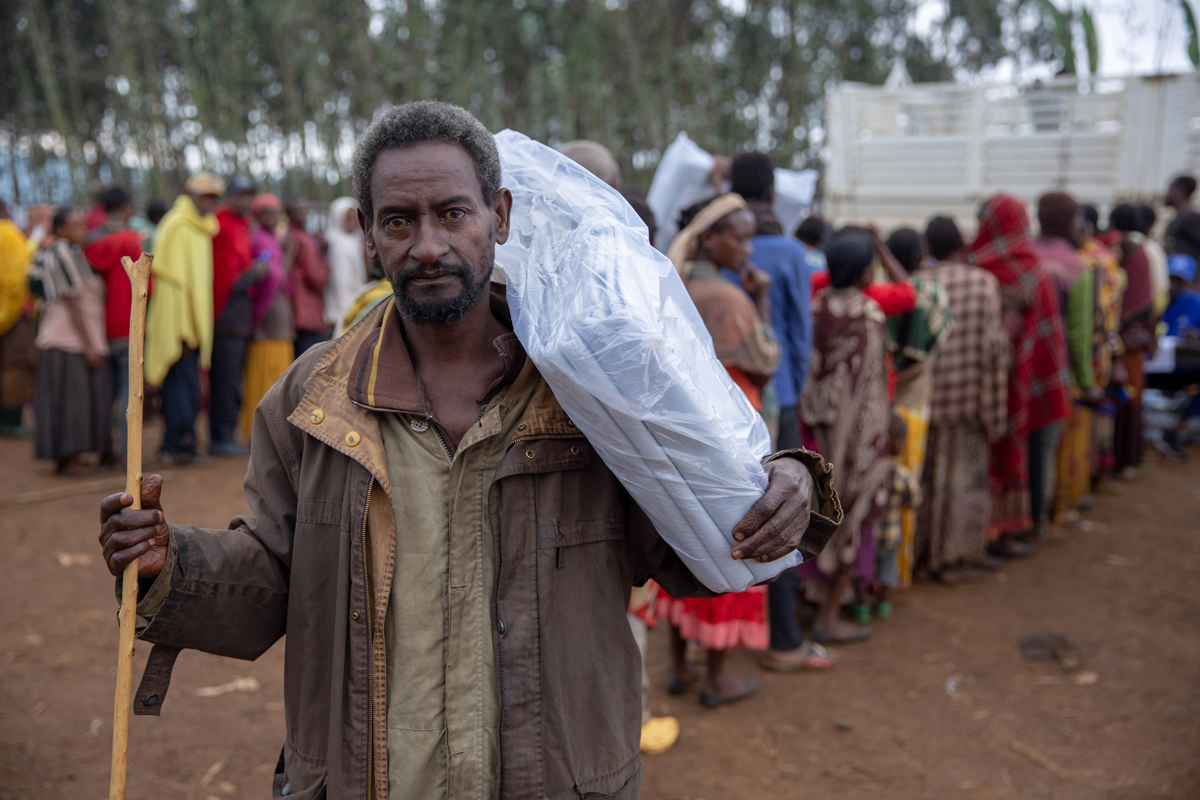 “The scale and complexity of internal displacement in Ethiopia require durable solutions. Cooperation among humanitarian and development actors is crucial so we can go beyond care and maintenance to address root causes and build resilience, allowing IDPs to build back better,” said Ato Tadesse, the Chairperson of the Federal Durable Solutions Working Group for IDPs.

The responsibility for caring for displaced citizens falls first and foremost in the hands of national governments; humanitarians endeavor to support and enhance these efforts. In Ethiopia, IOM has been an active leader in the cluster system – coordinating shelter site management, water, sanitation and hygiene (WASH) and health efforts of humanitarian actors.

Since 2012, IOM’s Displacement Tracking Matrix (DTM) has recorded occurrences and causes of displacement in Ethiopia, sharing data with governments and humanitarian agencies to allow for more impactful assistance.

“Collecting comprehensive data on drivers, trends, whereabouts and specific needs of IDPs has been a gap IOM has been filling for five years now.

The DTM put these communities on the map in Ethiopia and raised awareness about displacement trends among actors, paving the way for a more targeted and coordinated response,” said Behigu Habte, IOM Ethiopia Emergency and Post Crisis Officer.

The information sharing mechanism became the impetus for a more holistic strategy for durable solutions, now being rolled out across the country.

In the Somali region in eastern Ethiopia, where inter-communal conflict has internally displaced more than one million people as of August 2018, the regional government planted the seeds for what has become a national strategy for internal displacement.

Beginning in 2017, regional leaders across the country engaged in participatory consultations with displaced populations to gather and address the concerns of IDPs, including insecurity, lost property and a lack of livelihood opportunities.

In Somali and Oromia regions, local governments have already undertaken initiatives to relocate IDPs to new areas and provide livestock, land, farming tools and seeds to returnees who opt for agriculture-based livelihood. In areas of return, shelter, WASH facilities and irrigation infrastructure have been constructed.

After a successful pilot phase, plans are now underway to replicate the initiative across the country. In October, the National Disaster Risk Management Commission established the National Durable Solutions Working Group, co-chaired by IOM and UN Resident Coordinator’s Office, to coordinate the implementation of this strategy.

The national group will use the lessons learned from this initiative to develop a national policy pursuing a “progressive resolution of displacement.” The initiative ensures IDPs can freely choose where they live, access the justice system, integrate in their new communities and eventually return to their areas of origin to rebuild their lives.

“The Government of Ethiopia reaffirms its commitment to a new way of working to better support its displaced citizens through establishing a national-level Resilience and Solutions Working Group for IDPs under multi-sectoral platform of the Disaster Risk Management Technical Working Group,” added Mr. Tadesse.

These efforts reinforce existing instruments that address internal displacement regionally and internationally, such as the Kampala Convention, signed by 40 African states in 2009, and the Guiding Principles on Internal Displacement, launched in 1998.

This year’s 20th anniversary of the Guiding Principles presents states with new opportunities to affirm their commitments to protecting IDPs and resolving protracted displacement crises.

IOM contributes guidance, based on lessons learned from global internal displacement contexts, to national initiatives in Ethiopia and beyond. As part of its efforts, the Organization has developed institutional policies and frameworks such as Migration Crisis Operational Framework (MCOF) and Progressive Resolution of Displacement Situations (PRDS) to equip members states to better manage forced displacement crises.

This article was written by Angela Wells, IOM Public Information Officer for the Department of Operations and Emergencies.