Bob Dylan’s The Times They Are A Changin’ is always a good one to spin at the start of a year, as we reflect and dream of what was and what is to be.

“Come writers and critics
Who prophesize with your pen
And keep your eyes wide
The chance won’t come again."

A good chunk of my work is spent pleasantly but exhaustingly scouring what journalists are saying about the Organization I work for, about migration, humanitarianism, the United Nations and sundry themes, analyzing it all, and working out how best to enter the fray when needed. I also follow how technology is changing humanitarian work, and trends in how aid agencies market themselves. A lot of that debate happens on Twitter, and my new year’s resolution is to do less facebooking and more tweeting (and that’s a sentence that would have made zero sense a decade ago).

So there I was on Twitter the other day and I noticed two striking tweets, both from Africa, both from aid organizations (one from ICRC and the other from One.org). Check out the first below: 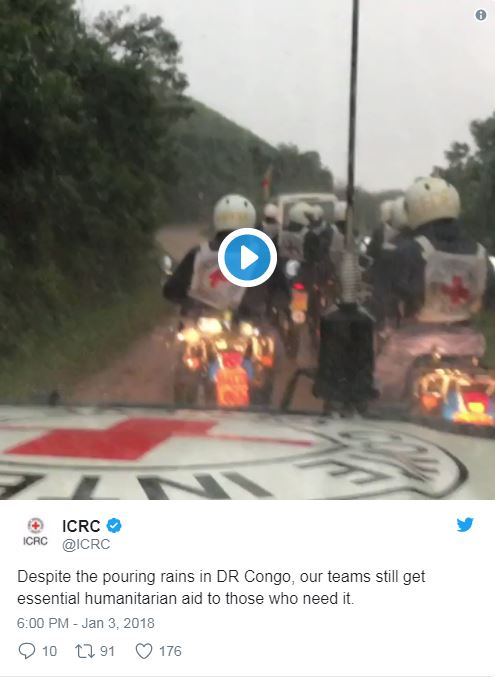 It’s an amazing piece of footage about half a dozen African aid workers and a couple of Europeans, struggling in the mud to get relief through in the Democratic Republic of the Congo. It’s rather retro, playing to the old tropes of guardian angels (all male, interestingly), doing the work that national health services really ought to be doing, were it not for the not inconsiderable obstacles of war, poverty, corruption and infrastructure, to name but four.

Armed only with motorbikes, and protected only by the Red Cross emblem, they set off into the remote bush to deliver aid. Sinews and gears strain to a backdrop of a crashing high-hat as man and machine are defeated by the cloying clay.

However, you can’t but be inspired, and admire the guys as they struggle up to their muscular thighs in the mud. Even if you know it’s being edited by a geezer in Geneva, munching absent-mindedly on a croissant, it still transports you to that remote African road, particularly if you’ve ever been defeated by “la boue”, as the francophone Africans call their mud (and I have).

A few tweets earlier in my feed, there was this the modern mechanical answer. 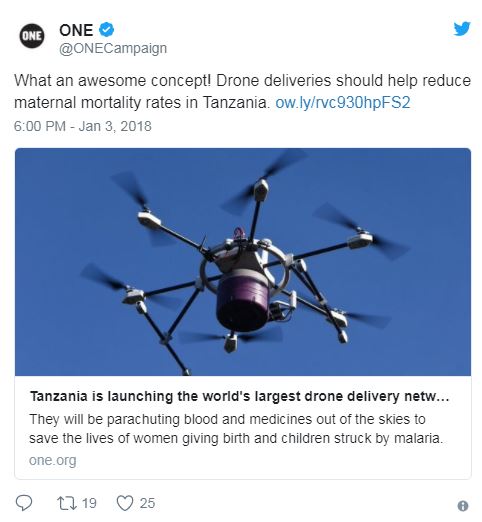 Robots on wings, dropping blood, vaccines, and drugs into rural Tanzania. The drones fly at 100 kmh, way faster than using the dilapidated roads, even in the dry season.

I’m pretty sure that ICRC and other agencies are using drones as well, so I’m not making a judgment about who is best, rather what is best.

As I alluded earlier, by rights, health services should be making not just the deliveries, but also these innovations themselves (the Tanzanian drones are funded by the UK’s Department for International Development) and the programme is managed by a Canadian company. It’s not off the ground yet (sorry!) but when it is, it will save money as well as lives.

The Red Cross, and its national Red Cross or Red Crescent Societies are respected the world over for physically going the last inch of the last mile and providing the human contact that is essential to humanitarian aid.

The question I was left with was not will drones eventually replace aid workers, but when will the middleman (or woman) finally be cut out? When will local people (and those that move among them) receive the health and developmental services they need from their own governments?

And while I think of it (and acknowledging that’s way more than one question), when will the Congolese and Tanzanian (and Cambodian, and Guatelaman, and Kyrgyz) innovators be given a look in?

Footnote: The drone story was originally published by the excellent ThomsonReuters Foundation and written by Kizito Makoye who is Tanzanian, so that’s a good start.

Back to Bob, for the last word:

This story was posted by Joe Lowry, Senior Media and Communications Officer at IOM.